The queen of one-liners: Jenny Holzer is on view at the Tate Modern’s Artist Rooms. Known for her text-based art, Holzer has been creating hard-core pieces since the 80’s. She is part of a generation of feminist artists that emerged in the late 1970s/1980s whose work and ideas appeared in public spaces.

Throughout her long career, she has created large-scale installations such as advertising billboards, projections on buildings, and illuminated electronic displays. But she has also created smaller works such as text pieces on golf balls, LED signs, tees, street posters, coffee mugs, painted signs, pencils, and stone benches.  About her work, she has stated: “I used language because I wanted to offer content that people—not necessarily art people—could understand”

A big part of the Holzer presentation at the Tate are the Truisms, her most widely known series. They are made up by nearly three hundred statements: reproductions clichés or the language of commercialism. Examples are: “PROTECT ME FROM WHAT I WANT,” “SAVOR KINDNESS BECAUSE CRUELTY IS ALWAYS POSSIBLE LATER.” and my personal favourite: “SPIT ALL OVER SOMEONE WITH A MOUTHFUL OF MILK IF YOU WANT TO FIND OUT SOMETHING ABOUT THEIR PERSONALITY FAST.”

These one-liners are not only poetic or generic, but they also deal with social struggles as well. Now famously part of the #MeToo movement, “abuse of power comes as no surprise” I’m not sure when she creates this Truism, but she did so at least as early as 1983. She was happy to give it to the We Are Not Surprised campaign group, who has been working on revealing sexual harassment and misogyny in the art world. Another project, one she created especially for the Tate, reacted to the Parkland high school shootings of February this year, in which 17 students and staff members were killed.

At the Tate, some statement flash by on LED signs, others are written on stone benches, others are presented on simple black signs. With some you might fully agree, others might stir you, but it’s hard to have a neutral reaction to any of it. But after all, nobody can say it better than the artist herself: ” I wanted a lot simultaneously: to leave art outside for the public, to be a painter of mysterious yet ordered works, to be explicit but not didactic, to find the right subjects, to transform spaces, to disorient and transfix people, to offer up beauty to be funny and never lie.” She shoots straight and never misses.

Artist Rooms: Jenny Holzer, now on view until the summer of 2019. For more information click here. 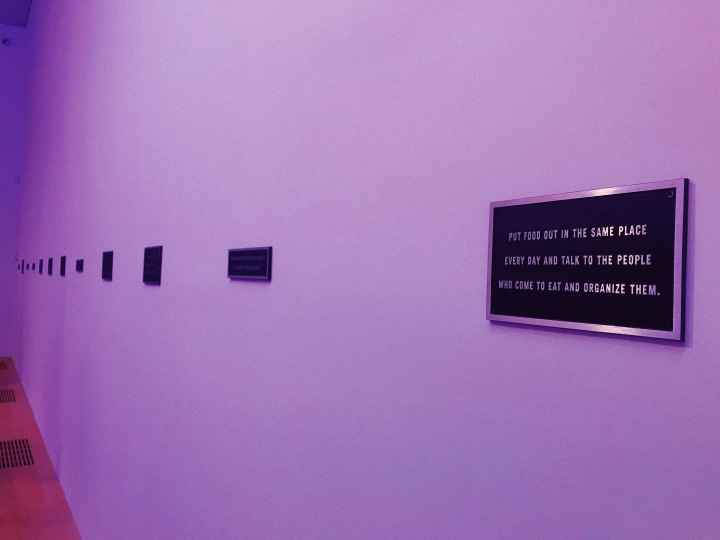