Hysterical laughter and piercing noise-making are not typical gallery visitor behaviour. But then again, there is a larger than life-sized phallus depicted at Auto Italia. Read My Lips is a survey exhibition of the works made by activist artist collective Gran Fury. With a core of around ten members, Gran Fury rose up from ACT UP, as activist group against AIDS and waged war against the disease between 1987 and 1995. The artist collective emerged in New York City and took their artistic protest to the streets using guerrilla tactics and billboard campaigns with bold and brutally honest statements, calling out conservative politicians and religious leaders by name.

In this exhibition, visitors can observe large-scale prints spanning from floor to ceiling on the gallery walls, fake dollar bills with statements on the floor, a moving image, a documentary, and activist pamphlets spread out over two spaces. I can easily categorise all of their work as very didactic, spreading information about AIDS and the inaction of the government of the United States against it, how to prevent it and to counter the many lies that surrounded the crisis. For example, one print states: “Welcome to America the only industrialised country besides South Africa without national healthcare.” The moving image contains the same imagery and statements as other print: “Men use condoms or beat it.” Another one shows three kissing interracial couples with different sexual orientations and expresses “Kissing doesn’t kill: Greed and -Complicating the pursuit of a generic version for AIDS drugs, pharmaceutical companies monopolised the drugs making it highly inaccessible for a broad audience. As a reaction, Gran Fury created a counterfeit currency with statements such as “F*ck your profiteering. People are dying while you play business. Fight back. Fight AIDS.”

The only wall text presents some extra information about AIDS, such as the exponential rise in deaths, the widespread achievements of AIDS activism and an explanation about the printed material that is displayed next to it. Mainly written in the name of ACT UP, the exhibition presents pamphlets that were used as calls for protests with specific dates and times, shows the demands that were issued to the government and church and got facts straights on AIDS prejudices and prevention. This stems clearly from a pre-Twitter/Facebook/Instagram era, where calls to action had to be announced in this way. Curiously enough, Gran Fury’s legendary SILENCE=DEATH is missing from the exhibition. Based on the available public information, the extent of the involvement of Gran Fury is unclear. The artist collective broke up in 1995 but has had exhibitions since then. As part of a public program, two of Gran Fury’s twelve founding members, Marlene McCarty and John Lindell took part in a conversation with Richard John Jones, the previous director of Auto Italia. For the rest, the art space does not mention any curators or whether any members of the collective were involved in the realisation of Read My Lips.

Needless to say, there is little need for interpretation in Gran Fury’s work because the message is right there. It does need extra information what Gran Fury was fighting which took place in a specific time and place, especially for the people who are not familiar with the events surrounding the AIDS crisis in the United States. The artist collective reacted in the 1980s and 1990s to the three hindering powers to a solution for the crisis: the US government with a spotlight on the president, pharmaceutical companies, and the church with an emphasis on the Pope Benedict XVI. In detail, the US government’s inadequate reaction to the epidemic, and the US pharmaceutical’s capitalist opportunism to make some money while at it, and the church’s ignorant denial and prevention of safe sex education. These three enemies, in a bigger picture, all related to the lack of rights for the LGTBQ+ community in the US.

What I cannot examine, is the impact these works had in their own time. Initially, the US government did not respond to the AIDS crisis. President Reagan did not even put the A word in his mouth until 1986, five years after the epidemic had been identified. Gran Fury took the task upon itself to spread information and countered misinformation, and that was not available for many people. Moreover, the reaction to the subject matter can be seen as a testament to a different public inclination towards the LGTBQ+ community. Back in the 1980s and 1990s, the public works of Gran Fury depicting kissing non-heterosexuals were vandalised and even banned from the Chicago Transit Authority. Although a 1.5-meter sized picture of a phallus can still provoke hysteria, I do not think and hope the imagery of kissing couples would evoke that kind of rage, at least in cities such as London and New York, as it did back then. For example, in this year, Love Simon premiered and is the first major Hollywood film focussing a gay teenage romance and is the 14th highest-grossing teen romance film since 1980.

What brings me to the following, while visiting Auto Italia, I kept wondering, why does this exhibition take place right here and right now? Although Gran Fury is hardly the only artists who use this artistic strategy of conveying a clear and cut political message one can find in an institutional setting, it feels out of place. These prints were placed on billboards or on the side of the bus, riding through cities such as Chicago or San Francisco for everyone to see. Moreover, Gran Fury was protesting the three said enemies in the 1980s and 1990’s in an American context. So, I can assume that those politicians and religious leaders are no longer in power. Although there is still not a worldwide available cure for the disease, it is presented as something bound to the past, as mentioned before, as a reaction to a particular political time within a specific country. Auto Italia states in their press release that Read My Lips is an exhibition of an archive and an “opportunity to revisit and rethink strategies of direct action, rights to protest and community organising available to artists and cultural institutions.” In this sense, it is very much of this time. On October 20, more than 500 thousand people went to the streets of London to protest Brexit. The week before, tens of thousands of people protested racism and discrimination in Berlin. The week before that event, thousands of people protested in Croatia against the government’s alleged lack of punishing Serb war criminals from the 1990’s war. I could go on for a while. In all instances, the demonstrators were armed with protest prints and signs.

Marlene McCarty, one of the members of the collective has told Hyperallergic on why they decided to put their work in an institution in 2012:

“It took quite a bit of convincing to get them in an institutional gallery. They were like we’ve never had our work historicized or institutionalised we don’t want to do it. But I came up with the educational idea. It’s an educational place where there is a continuity between the past and the present. You can make an artwork out of making a historical reuse of your art.” (‘Is Art Enough? Gran Fury in Perspective’. Hyperallergic, 21 February 2012.)

The emphasis on education is evident in the space but also in the free accompanying exhibition publication. It includes an extensive amount of information, such as facts about the failure of the US government to form a widely available healthcare system or to find a treatment for AIDS. It also elaborates on the deep-rooted politics of the crisis, such as how race, gender, class and homophobia influenced the formation of an AIDS policy. Very disturbing is the presentation of imagery of homophobic hate speech, such as a white man holding up a sign stating: “No tears for queers” and “Thank god for AIDS.” Moreover, it includes magazine covers about the topic from the 1980s, other protest campaigns against the disease, information about celebrities that were committed to helping the fight, and so on. Remarkably, it only covers only a little of Gran Fury’s work and instead paints a broader picture of the spirit of the time. For anyone who has lived through the AIDS crisis of the 1980s and 1990s, Read My Lips is a recap of the significant effort and achievements of AIDS activism during the crisis. For anyone who has not, brace yourself for a history lesson.

Read My Lips at Auto Italia is on view until December 2nd. For more information, click here. 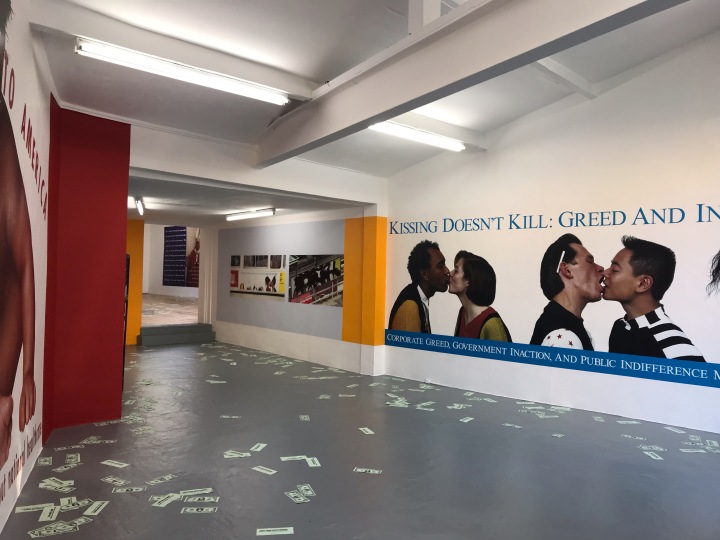 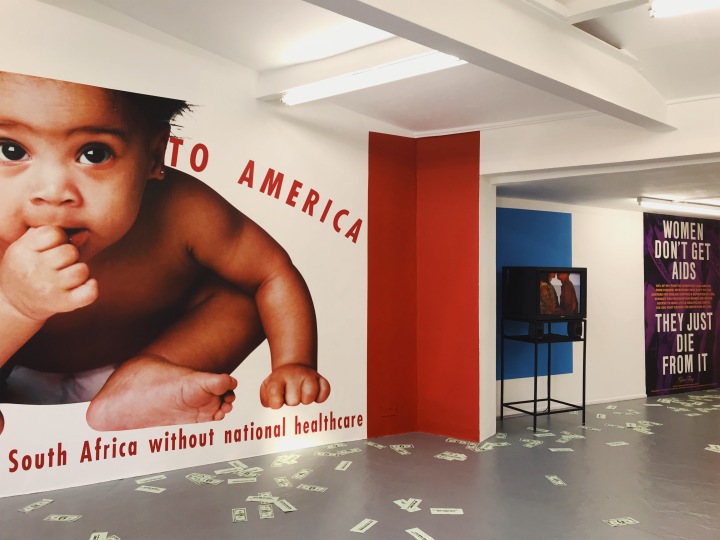 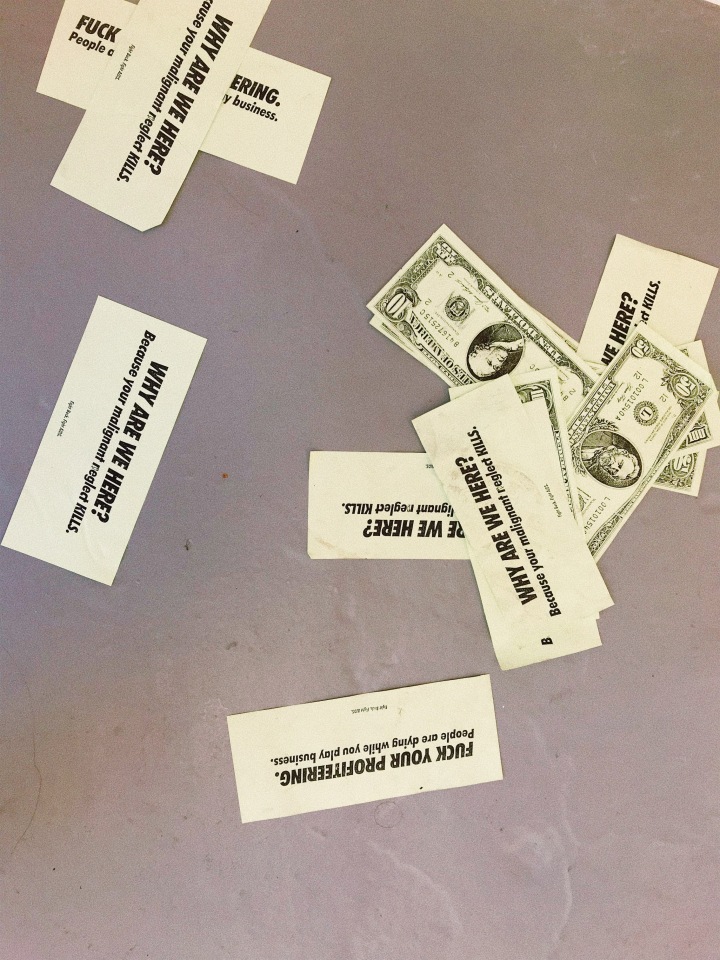